Plastic and rubber chew toys tend to be less costly than natural alternatives, they tend to be clean (no grease or offensive odor), and if made from a strong synthetic material, they may hold up pretty well to chewing.

What’s not so great about synthetic chew toys is that dogs aren’t huge fans of them. Intuitively, it makes sense that a dog would prefer a natural bone over a piece of rubber.

I also don’t like that pieces of synthetic toys, if ingested by your dog, stand no chance of being broken down during digestion, potentially causing an intestinal problem. GI issues can be very costly – and life threatening – for your pet.

Due to the risks of intestinal blockage and potential contamination from things like BPA, phthalates, or lead, we recommend steering clear of rubber and plastic chew toys that are intended solely for chewing.

The rubber treat dispensing chew toys might be an exception, though. Since your dog should push and roll these types of toys more often than directly chewing on them, the risks are lower.  To further lower risks, I also recommend going with a US manufacturer.

Nature has designed your dog with a digestive system that can handle most animal based chew toys.  Dogs also tend to enjoy a natural chew toy more than a synthetic one – they smell better and taste better. Some natural chew toys, like bones and antlers, even provide some nutritional value.

Generally, natural chew toys carry a higher risk of bacterial contamination that could be harmful to your pet. Some natural chews are smelly, greasy, and rather unpleasant to have around the house. Also, many natural chews don’t last very long (although this is often because your dog enjoys it more than the synthetic alternative and chews it more aggressively).

With natural chews, you also have to be careful to buy products that are minimally processed. Because of the way rawhide is processed, there’s a risk of the material swelling in your dogs digestive system and causing a blockage.

Another example is cooked bones.  A cooked bone becomes brittle, increasing the risk of splintering and creating sharp pieces that can puncture your dog’s digestive tract.  So stick with natural chews that have been processed as minimally as possible.

If you’re looking for a quick, natural chew toy, bully sticks are great.  These natural chews are generally considered safe and every dog I’ve met loves them.  Again, they tend to get chewed up in a matter of minutes or hours, though.

If you want your chew toy to last, then you want a bone. The problem is the safest bones are not processed, which can make them pretty nasty to have around indoors.

Elk antler dog chews check all the boxes when it comes to chew toys. They’re natural, minimally processed (only cut and sanded), highly attractive to dogs, long-lasting, and clean. They’re also humane, dropped naturally by elk and collected one a year. What more could you ask for?

If you’ve never tried Antler Chews, rest assured they’re NOT a new product. They have been on the market for a while and have earned a lot of rave reviews from dogs and their owners. Antlers are also chewed by wild animals, from rodents all the way up to wolves.

Whether its sticks in the yard or you’re the legs of your sofa, dogs love to chew on wood. However there is a much safer and less costly way to let them do it. One of the healthiest, longest lasting, and unique options are actually chews made from the tree roots. Here’s everything you’ll want to know about root chews for dogs.

Nowadays, most dog owners have started to realize the importance of choosing more natural products for their pets. There has been a big shift away from chews that aren’t made from plastic, rubber, and even rawhide that uses artificial coloring, preservatives, and flavors.

One of the many reasons owners choose root chews for dogs is that they are totally organic. They are only made up of only a single ingredient that’s 100% natural: wood.

However, that doesn’t mean you should you should go outside and cut down some branches or dig up some roots for your pet to start chewing on. In fact that’s exactly what you shouldn’t do.

Tree root chews for dogs are cut from the roots of specific tree species. And these species have special properties which allow them to be chewed safely while adding to the health and well-being of your pet.

Root chews for dogs are made from wood and they’re safe for pets. This may sound strange to some dog owners, but it’s the truth. The chews are made from the roots of tree species such as the Java, Araack, and Heath trees.

These are known to produce some of the densest wood in the world and therefore will not splinter. Their roots are hard, but not at as hard as bone, and they won’t damage a pet’s mouth or teeth.

In contrast to bone and weaker types of wood, as a dog chews and works on a root chew the edges will slowly become slightly softer in texture. This is due to both the chewing action and the pet’s saliva. And instead of splintering, small moist wooden fibers will typically crumble off of the edge of the root.

These shavings will get on your floor and they will need to be swept or vacuumed up. However they won’t stain, smell, and aren’t dangerous. In fact they can be ingested safely and pass through your pet without a problem because roots are mainly made up of fiber.

The contoured surface of the root chew works similar to a natural tooth brush.  As the dog chews it helps to reduce plaque and tartar build-up. The roots also contain natural tannins which aid in tooth and mouth cleaning and are described as a mouthwash made by Mother Nature herself.

Root chews for dogs actually can help to make a pet’s teeth stronger as well. The roots used contain large amounts of both calcium oxides and potassium which strengthen tooth enamel.

One of the best benefits of root chews and their owners is that they can last for an extremely long time. In fact depending on the type of chewer your pet is and how often you allow him to chew it, a single root can last anywhere from a few weeks to even several years.

They are so long-lasting because of several factors. Tree root chews for dogs are dense and also typically wide and sometimes oddly-shaped. So unlike a bone or traditional chew, dogs have a harder time getting leverage and really bearing down on them.

Luckily this often seems to cause pets to intensify their efforts, working even harder on their root chew and becoming more determined to wear it down. The tannins naturally present in the roots help to make chews last a bit longer as well.

Because they tend to dry out the dog’s mouth usually every thirty minutes or so he will need to take a break and get some water. And this allows the moist edges of the root to harden up again.

Because this is such a unique type of chew, as of now, there are only a handful of brands. Gorilla Chews for dogs for example are one of the most popular and are also well-known for just how big their larger size roots are.  Himalayan Ruff Roots are another top choice.

These are actually made by the originator of another organic and incredibly popular option the Himalayan dog chew, which is made from the milk of Himalayan yaks. Other reputable brands include: Barkworthies, CHEW, and Antos. And don’t overlook Anco roots for dogs as well.

How To Give Your Dog a Root Chew

When giving your pet anything to chew on supervision is always important and root chews are no exception. You’ll want to keep in mind that unlike a bone or rawhide these actually are not meant to be treats for your dog to eat.

While small pieces can be consumed safely, a root chew is really an all-natural chew toy for your dog to work on and slowly grind down over time. If for any reason your dog is able to tear off larger pieces from the root you’ll want to throw them away so your dog doesn’t ingest them.

If your dog seems unsure of what to do with his new chew toy it may simply be that he’s not sure it’s appropriate to chew on. A quick and easy way to get him started is to spread a bit of tasty peanut butter on it. This will get him licking and most likely chewing very quickly.

Root chews for dogs are as organic as it gets. And with the proper supervision they are a natural option that promotes healthy teeth and gums while keeping your pet or entire pack happy and occupied. 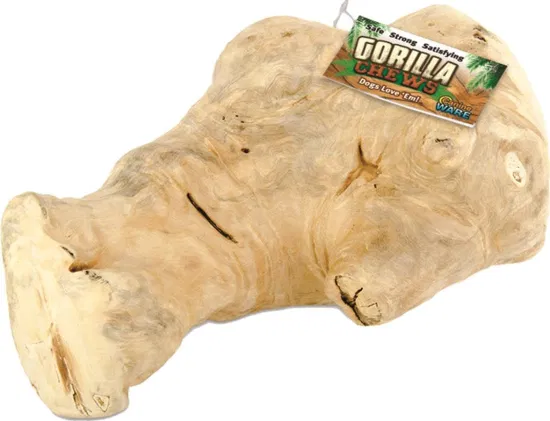 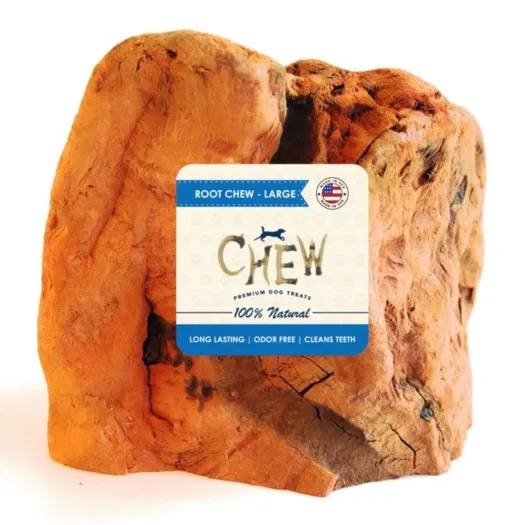 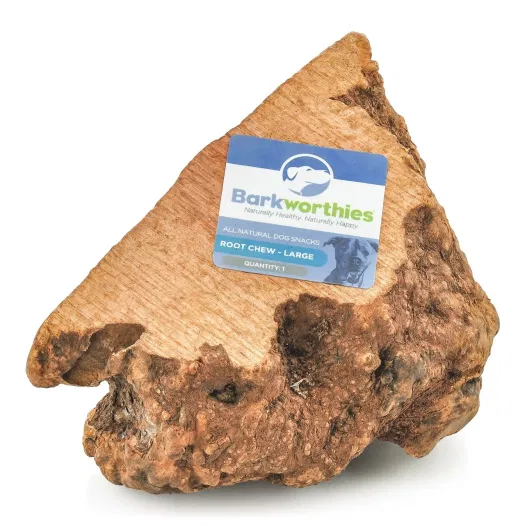